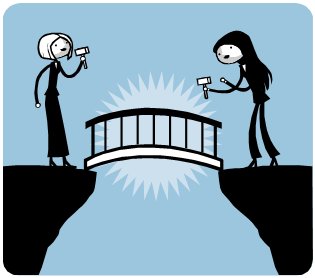 Ou Yang wanted to know François better, to ease the worries of her sisters and mother back in China. Yet deep down in her heart, their concerns were hers as well. Her family did not help her by putting more doubt in her mind.

Her family had liked Ge Wen – though not as an extraordinary person but as a kindhearted Mr. Yes. But now they had not the faintest idea about Francois. Photos wouldn’t add up, and a light smile on his face would not trigger any curiosity about him or change their total ignorance of “foreigners.” They would tell Ou Yang not to laugh too early before she got to know him.

“Hmmm, we don’t know them! They are different from us! They do not understand the qin qing (亲情) of our culture, the close blood relationship and feelings between family members,” Ou Yang’s family warned her.

Those green-eyed ghosts, who once invaded China and drove the Last Emperor and the Dowager Cixi to Xi’an, were becoming someone who might someday visit them as their son-in-law. That was scary. Not that François was scary, but that they did not know how to handle this new thing. They would be absolutely out of orbit.

Ou Yang came to see Simone one late afternoon on the way back home after running some errands. She found Simone in her front garden watering the plants.

She had a secret mission this time. Oug Yang wanted Simone to check Francois’s credit, to see if he was a good, reliable man. She knew that as a real estate broker, Simone had the mechanism and contacts to check credit. Ou Yang’s short encounter and love affaire with the young French man Mathiux Galland over a decade ago in China had left her with nothing solid about seriously dating a Westerner.

Simone was so astonished by Ou Yang’s request that for quite a moment, she did not know how to respond. Ignoring her demands, she bent down over some weeds and pulled out the roots. Ou Yang, it seemed, was incapable of trusting the normal ways of judging François’ character, and perhaps Ou Yang assumed that a foreigner’s behavior could indicate different meanings from what she was used to. She had to go as far as to check out Francois in such a drastic, almost ‘professional’ way.

After a moment of silence, Simone said coldly, almost sarcastically, “Of course I’d like to do it for you. But the problem is, in order to do a credit check, I need to have an authorization letter written and signed by François himself. And we need his social insurance number, address and some other pertinent information.”

Having lived in Canada for ten years, Ou Yang couldn’t say she didn’t know the rules, but she was asking Simone for a favor, and to get it done without Francois’s consent. Plus Ou Yang had all the necessary information ready; all that was missing was his signature.

But Simone had been working in the Canadian system as a professional long enough to have a strong sense of what was considered “right and wrong.” As the older person with more conscience, she had no problem refusing her friend’s indecent request in the end.

Slowly, as Ou Yang got to know more about François, more and more was revealed about Ou Yang at the same time too.

One day, over the phone, Ou Yang finally told Simone the reason she wanted to check François’ credit: François had asked to borrow $3,000 to fill in an emergency cash flow shortage. She hadn’t been able to believe that the man she was dating would ever ask to borrow money from her. It had made her eyes pop and her mouth drop wide open. In her mind, no foreigner would ever ask to borrow money from his girlfriend, especially from someone who was more or less a single mother with only a regular job.

Even Simone had a hard time believing that a decent, experienced Canadian businessman would turn to his relatively new girlfriend in an emergency instead of going through his usual and reliable professional channels.

It was nearly impossible for Ou Yang to digest. She had thought she was dating a prince who was rich with money and void of any of life’s mundane problems. It was hard for her to see beyond the material, beyond the BMW X5, which, in her eyes, was a symbol of doing just fine. But this money issue had created a contradiction in all she knew and saw about Francois. She was beginning to think that her mother and sisters might be right about things. After dating him more than six month, she still didn’t really know him!  She stopped smiling.