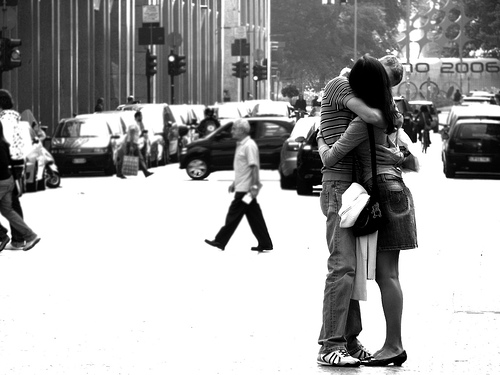 Ge Wen accepted a job and moved to Vancouver in the middle of September 2011.

He presumed that Ou Yang would come to join him, bringing their son along, if he was making more money, and that he would feel more comfortable in an English-speaking environment. Feeling more comfortable would usually make one more relaxed and better in bed, which would please his wife as a result, and set everything right again. He was guessing his way out.

The tough thing for him was that his wife seemed to have a habit of appreciating what she didn’t possess and destroying what things she did. Ou Yang was a victim of the martyr mentality – someone  who believed o be the unluckiest person on earth, misunderstood by the whole world, and what’s more, that the entire universe opposed her on purpose.

Ge Wen was indirectly made to feel guilty, thinking he was to blame for not providing happiness and a better life for his wife and son. More money and a new environment, he somehow believed, would improve their situation and give the three a fresh chance in Vancouver.One can certainly hope for the best, even though physical or change in geographical locations might not have anything to do with the change of one’s mentality.

Unconscious of what the root of the problem wa, Ge Wen blamed himself. He focused on the needs of his wife and son – seemingly achievable goals – to avoid having to attend to his own. After all, he came from a nation whose needs were invariably shut out, making it easier to care for the needs of others than one’s own.

When he really thought about it, he wasn’t even sure what his needs were. He had become like a coconut shell drained of its juices, or a transplanted tree strangled by strong vines, choked by the needs of his wife and son, or by the cultural need for survival of the Chinese man.

Somewhere down the line, his heart and body had become disconnected; he had no idea who he really was. He felt absurd and totally disoriented, and without bearings, as he had left his whole world behind once again.

He was completely in the dark about Ou Yang’s online dating.  With his busy new $60K job and a new lease on life, Ge Wen continued dreaming energetically about his reunion with the two he left in Montreal. His increased salary didn’t really make much difference with the rocketing house prices and higher cost of living in Vancouver, let alone the fact that the Quebec offered better child support and much less expensive education

Ge Wen called his son twice a week – one weekday and one weekend – to ask about his studies and chess practice. Every four or five weeks, he made the flight back to Montreal to visit, using the discounted airfares from his accounting job at Air Canada to fly back and forth.

During these visits, Ge Wen slept in the basement guest room of their cottage. He would take his son shopping during the day and out to the movies in the evening.

Only when he was back with his son, either playing with him in the basement or going out, or holding his soft little hands, did he feel back to himself, no longer lost, almost even happy, Coming back to Montreal, a city that he had hated so much, made him feel nostalgic for his good old times. Traveling back and forth and being with his son distracted him from his miserable, awkward and lonely present. His son was like an alternative version of himself in the past and also in his own future,  but without pain or loss.

He kept trying to persuade Ou Yang to sell the cottage and move to Vancouver. But Ou Yang didn’t want to. She wanted to try a different life with a different man, and it was troublesome to search for a new job.

She didn’t love her job; her boss was “unprofessional”, someone for whom she had nothing but contempt. But she was still reluctant to move. It was the first time they had stayed in one place after leaving Xi’an, China, settling in Montreal for nine years now, and she wasn’t eager to pick up and move again. She also wanted their son to continue learning French.

It all depended on François, this new man in her life. If it worked out, she would stay; if not, she would continue dating around or leave for Vancouver.

Ou Yang dropped by Simone’s one Friday night; Ge Wen was visiting and had taken their son out. He brought the check of his share of the mortgage payment.

“How is life with Ge Wen not here?” Simone asked.

“Oh, God!” said Ou Yang, as if the God in whom she did not believe would understand.

“Busy,” she said, “suuuper busy.” Ou Yang couldn’t believe how difficult it was to handle the full schedule all on her own.

“François lives in Mont St-Hilaire on the South Shore and works from his home office. It takes almost an hour to get here, so he only comes over on weekends. He’ll take us to dinner or golfing sometimes, and we have fun. He’s really nice to my son, too. But he can’t help out during the week,” she explained.

“Well, no one is perfect,” said Simone. “But he’s a good person and nice to your son; that’s what’s important.”

“ Yeah, I know, and I am happy about that!” agreed Ou Yang. “No Chinese man would do this, treating my son like his own.”

Chinese people and westerners had a very different mindset. Chinese men would avoid middle-aged women with extra baggage, preferring naïve young girlfriends instead. And a married Chinese woman and mother would be uncomfortable and feel strange with a westerner adopting someone else’s child as their own. Family blood was the only tie strong enough to warrant kindness and care.

Simone hadn’t heard from Ou Yang in a few months, but she understood that the life of a single mom was not easy and hadn’t wanted to disturb her. She hoped Ou Yang would begin to enjoy her life a little now that she had made her decision. Especially after months, maybe even a year, without sex. At last Ou Yang had someone who “cared for her”, and cared about her son too.

Of course, François wasn’t perfect in Ou Yang’s eyes, but who was in this world? Still, Simone was happy for her, happy to be replaced by someone who could help solve her friend’s problems   with something that had been said to be universal and magical.