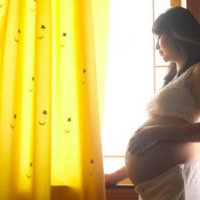 The mild light shone through the windows of their little cottage, and diffused onto the thick white snow lying leisurely around the house. From the cottage, frozen and stiff  outside in the -25 C cold, came the soft  notesof Erik Satie from the basement. Yes, the small cottage where Ou Yang, Ge Wen, and Sonny lived had become a lively creature and the warmth, constant piano notes, and laughter became increasingly louder and louder. In this severe winter and under the “mercy” of heaven, it became the indispensable shelter where three voluntarily “de-countried” humans extended their limbs and unfolded their rigid shoulders, with the cottage itself being tended and maintained as if it were a person. The cottage born of the cunningness of all that life can bring.

Life always gives us better news in its worst season to keep our minds cheerful. Ou Yang got the news a few weeks in advance that Elizabeth, her dear long-lost friend she had met back in China, was coming to visit her. Oh, dear Elizabeth! That one special human who brought Ou Yang something to soothe her nerves and please her soul back in the old city of Xi’An! She was finally coming to visit Ou Yang after all these years of silence.

It had been more than 15 years, but it felt like yesterday. The old city walls, the Buried Terra-cotta Armies, the famous snacks of “Yang Rou Pao Mo” and other delicious foods. Weirdly, Elizabeth, an American woman, was able to bring up so many of Ou Yang’s memories of her own city, as if Elizabeth was an old Chinese friend. That particular experience with Elizabeth in Xi’An had somehow bound the two women together in a way that we could never have imagined its relevance.

Elizabeth had had three more children during the 15-year time gap. Her eldest was already about 23, and his name was John. The second was Brent, and the third was a girl named Christie. The most worthy of mention was the fourth boy, because he was born in China with the help of Ou Yang as interpreter back in 1996. Elizabeth and her husband Jonas Larsson (of Swedish origin) first went to China to teach in 1990, had left to teach in Singapore and Malaysia for some years, and then came back again to Xi’An where their fourth child was born. Three other kids had been born in the previous six years. This was difficult to believe for the new Chinese who had been on a strict single-child mindset since 1979.

Ou Yang remembered very clearly what Jonas had asked her at the hospital while she had been helping Elizabeth calm her gasps between the shots of contraction pain:

“Do you want more than one kid?” Jonas inquired seriously, with a keen look of love in his eyes.

Ou Yang’s answer was not surprising, but might have sounded abruptly unkind.

It is out of question for city Chinese to think about having a second child, mainly for the reason that they will lose the permanent government jobs that they had studied and waited so long for their life. A second reason might very well be that we were used to life with only one child and city mothers all having jobs. Ou Yang was even having difficulties with voluntarily conceiving her first (and only) one.

To Ou Yang’s, the Americans were very strange too. Right after the birth of her child, Elizabeth ate ice cubes and dried nuts, and she even took a shower the same day of delivery. All Chinese women know that new mothers should never be allowed to wash their bodies or eat cold or dry un-nurturing foods after childbirth. We all become fat like pigs after both families forbid us from any activity, feed us with 20 heavily sugared oily eggs a day until we were literarily transformed into stinky, glorious MOTHERS! Furthermore, we were not allowed to watch TV, or to read, because it was believed that we would have hurt our eyes permanently; we were not permitted to go outside, because there was wind and we would have caught a cold and been ill forever…

Seeing Elizabeth breaking all of those taboos was an eye-opening experience for Ou Yang. It all set her mind off to question Chinese habits and customs. She started wondering about many things, like how other women in other parts of the world gave birth and how their kids were raised.  She also felt the strength and stubbornness of Chinese customs that had been overly protective, or had been preventing the Chinese from the necessary exercises for mothers and their children. It seemed that something very wrong was starting there, right there, the very moment the child was out from the mother’s womb.

Ou Yang was a person who seemed tough on the outside, yet was very empathically charged. She went back to her mother’s home and told her about the pathetic American woman who had nothing to eat but ice cubes and dried nuts. Ou Yang hadn’t even opened her mouth to ask her anything, but her mother was already gone to the fresh market for a live chicken to kill. Two hours later they had chicken soup filled with nutritious Chinese medicines: Dang Gui & Huang Qi (Dang Gui当归-sweet taste &黄芪a bit bitter taste). The medicines were meant to give blood back to the mother who had lost much in childbirth, and to boost her immune system. One hour before it was ready, Ou Yang ordered her brother-in-law, who worked for the government, to arrange a car to bring her to the hospital. She wasted not a minute that would let the soup go cold! It was still warm when she began feeding Elizabeth the righteous chicken soup. She felt very proud that she could do that for her, her very special friend, Elizabeth.  She was returning Elizabeth’s special treatment with equally important and highly nutritious chicken soup from two generations of her family.

Elizabeth was always a romantic and sweet person in Ou Yang’s mind. There was no one else, not before, not now, and there would be never anyone else like her in this world. She loved poems, novels, and telling stories. She was astonishingly articulate with good, encouraging, sweet words. She had fully understood the Power of Words and foreseen the impact of them on Ou Yang’s eardrums and into Ou Yang’s whole system of thinking and behaving. Ou Yang had long before started talking like her, walking like her, smiling like her, and even thinking and feeling like her…

At that moment, Ou Yang started feeling hot in the eyes and sour in her nose.  Elizabeth was not anyone else in her mind and in her life. Ou Yang had grown older and more mature because of Elizabeth, with her kind, sweet and praising words, at her encouraging nods and in her unusually different smiles. She would never forget when Elizabeth came to visit her with her first son and ate Chinese porridge with Ou Yang and her mother. She could never have imagined that a person from across that big ocean, a seemingly slim and fragile Irish-American woman, would treat her like she was worth millions!

Ou Yang had been a strong, tough woman and had seldom shed tears for anything, but right then, she could not hold her tears any more and she let them pour down her face. She cried, for the first time in her life, for something not sad, but rather joyfully inspiring and energizing. She had definitely (and luckily!) been struck by lightning back in China, the kind of lightning that struck better than generations of any moral teachings, better than political brain-washings, a kind that struck better than anything else in the world: joy and love through smiles and wonderful words.