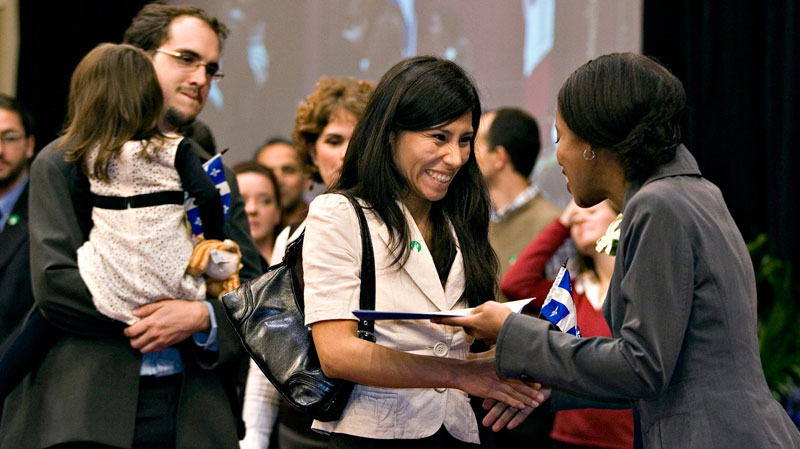 What determines who we are and how we behave? Is a new country with marvellous and favourable benefits of any help to us as we adapt and become better and happier people? What prevents the pendulum from swinging too high on both sides and being pulled back towards the centre? –

Before too long, in the early spring of the second year, Ou Yang was pregnant.

The first spring in Montreal after the first dreadful winter! It was so good to stop breathing in the biting dry air, soothing like aloe on a burn. So delightful to see the buds of willow trees on the banks of the St-Lawrence River growing into leaves within just a few days. The brisk feeling of the long rough winter finally surrendering to the tendency of extremities swinging back to the centre! Though the spring in Montreal is as short as a dog’s tail, it’s enough to rekindle the hope of a wonderful summer. Still chilly, the temperature is just right to urge life into its wonderful ways.

Ou Yang attended French courses in a government program during her pregnancy, and as always, she was a fighter. Even though nausea often drove her to the bathroom before 12 weeks of pregnancy, she was tough enough to hold on to her classes and only missed out on a few lessons. To her, it was really no big deal, because she had a talent for language and had already taken five months of classes in China.

There were few Chinese in her class, because the first Chinese emigrant tide only started around 1998, with the first group arriving in Canada after 2000. Of that group, most stayed in Vancouver or Toronto.

There were many other immigrants from Eastern Europe, such as Romanians, Croatians and Russians. There were Africans from Egypt and Kenya, and South Americans from Mexico and Chile.  She seldom met North Africans in the French classes, because many of them were from French colonies like Morocco and Algeria, and they already spoke French in their home countries. Sometimes, she would see English Canadians who came back to take French courses to refresh their knowledge of their forgotten national treasure. All of them learned to speak French, but it came out with the wonderful various accents marked by their different countries and cultures.

French, Spanish, Portuguese, and Romanian are all Latin languages. Almost all south American countries speak Spanish, except for the Brazilians, who speak Portuguese; Guiana, a French territory, speaks French, as for the rest, Guyana, the Bahamas, Montserrat, Jamaica, and many other small Caribbean countries and islands speak English.

Most South Americans and Romanians were excellent in French mainly because their languages belonged to the Latin language family, so learning French is much easier for them. For the Romanians, there is a second reason that makes them even better learners: most of them are well educated, usually having earned at least one University degree before coming to Canada. The majority of Chinese immigrants from Mainland China share this characteristics, but because of the fundamental difference of Chinese from Latin languages, both in its writing ,pronunciation and intonation, the Chinese were advancing with enormous difficulties. When Quebecers don’t understand something, they often say: “C’est du Chinois?” (This is Chinese?),” an informal social commentary on the level of strangeness and impossibility of comprehension of the Chinese language to them. Therefore, if the Chinese think that French is impossible for them to learn, it is not hard to understand.

Ge Wen chose not to learn French from the very first day of his arrival. He had never learned a day of French, even though it was free and he was eligible for a government subsidy of about $500-800 per month. He felt that English was more than enough for him to improve, and he would surely be confused by learning a second language that was even more difficult. He enrolled for six months in English classes and one year of his accounting courses taught in English. After all that education, he stumbled along quite fine with his English, which was enough for finding a job.

But they were living in Quebec where French, while not desperately necessary for survival, is indispensable for further integration. Only the fact that Ge Wen would not have a clue about what his future child would speak or write about was enough to see the point. Nevertheless, the will of implementing life’s strategies depends on the intelligence of seeing the importance of certain values, such as crossing the threshold into a new world, and further, into the heart of his next generations. The idea of leaving the place where our children have grown up is not likely feasible for most people and their children, even though it happens all the time, and so learning the local language becomes a must. At the very least, it does not hurt.

Ou Yang gave birth to a son on November 20th, 2004. Ge Wen stayed home with the baby for the first six months, and then he received a few calls for job interviews. He happily got the job that he had wished for at just the right time. They were both very happy that Ge Wen had started working, allowing Ou Yang to spend more time at home with their son. She had not planned to look for a job before their son was two, although she could have sent him to daycare from the age of six months. They could not believe that so many other parents sent their babies to daycare so young.

When we are young, we, in general, have a faster metabolism. We make and consume energy much faster than when we are older. That is why younger people act and react faster than older people do. But among people of the same age, metabolism varies greatly. We cannot conclude that intelligence has anything absolutely and directly to do with metabolism, but it has a certain relation, as energy does play an important role in fueling activities that might generate sense, sensibility, knowledge, and thereafter consciousness. It is consciousness that marks knowledge as intelligence; otherwise, knowledge is as dumb as facts in history books that Chinese kids recite without knowing the meaning. Ge Wen was not stupid at all, but his metabolism ranked under that of Ou Yang’s.

It was Ou Yang who ran the family, since she had higher metabolism, clear vision for their life, and a stronger will. Shopping for the baby, buying groceries, seeing doctors, choosing the daycare and putting their son’s name for queuing up the line, among other things. Most of the time, Ge Wen was the cook and chauffeur. Ou Yang’s family played an important part, because she was the youngest daughter and sister with ten years’ difference. There was much advice and suggestions given by her family and it seemed that the husband’s opinions were unnecessary. Ge Wen had only the right to carry out their decisions, no right to give more ideas, except for when they were needed. Ok, then, he had a chance to relax after work!

“Aren’t you lucky?”,  Ou Yang would often say to her husband, as if she and her family were doing the husband a big favor.

This way of going about things continued all the time. As a Chinese proverb says: ” The capable work more”(能者多劳)。

Apart from metabolism, curiosity also drives us further. It puts interest in things we do not know and it puts necessary doubts in our mind that are meant to be eliminated in order to find an answer that makes sense to us.

Ou Yang was a very energetic woman, and at the same time very curious, while her husband was more traditional in following set rituals and rules even in his way of thinking. Ou Yang was up for any activity, and ready for trials of all sorts in their new country.

But it was more difficult to see who Ge Wen was, and why he was that way. Maybe he acted so conservatively because of his metabolism, or maybe it was the other way around and his conservative way of thinking prevented him from being curious, or perhaps Ou Yang and her family’s full occupation and invasion of his space had fostered him into inertia. As the only son of his family, he had been under the wings of his mother, and now was being moulded into a husband under the strong grip of his wife and the manipulation of his in-laws.

The quality of being intellectually curious is cultivated at an early age, and in Ge Wen’s case it is hard to understand why he lacked intellectual curiosity, since he had been raised by a family of teachers. It was not easy for anyone to lend any help, and even harder or impossible for Ge Wen to utter anything about his awkward, hopeless situation.