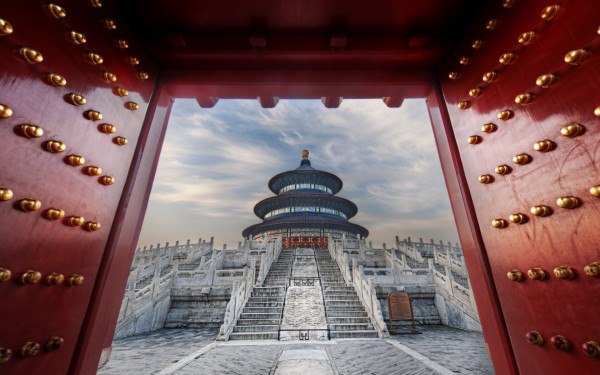 It would be rare to find a traditional high wooden threshold in Chinese big cities now, but some can still be found in the countryside. The bigger a city grows, the lower the thresholds get. Isn’t it wonderful that now we do not have to lift our feet one after the other to cross over the high wooden thresholds of the past?. Kids were held back either from misbehaving or running around playing because of its height. Yet as one kind of threshold is becoming lower for convenience and comfort, and at the same time to let peasants into the city world, other thresholds are becoming higher and harder to surmount, such as that of the “Hu Kou” Registration Bureau, and schools for the children of migrant workers. As millions of countryside Chinese are let into big cities as cheap laborers, many city Chinese like Ou Yang and Ge Wen are passing through an invisible threshold into another world!

When the plane began to descend, Ou Yang knew that she was arriving in a city about which she had no feelings and no knowledge! She had finally arrived in whatever city it was, putting an end to five hours of waiting at Beijing Airport, eleven hours across the Pacific Ocean, two hours of nervous hustle in the Vancouver airport before another five hours across Canada. Ou Yang had been desperately bored, not knowing what to do besides endlessly scrolling the list of movies, getting up to stretch and sitting back down while letting her neighbors past to the toilets.

Finally, she had arrived! When the wheels touched the threshold of the Pierre.E. Trudeau Airport of Montreal, she did not notice that she had been crying. She did not know if she was crying because she had left China and her family behind, because she would not know when she would be able to muster up her courage to go through the ordeal again to go back and visit China, or because her husband Ge Wen was waiting for her at the airport after being alone in Montreal for six consecutive months.

All the anxiety of wanting to be in a place that was not moving left Ou Yang when she spotted her husband. Ge Wen was there, waving to her among the scattered people; it was midnight, and Ou Yang’s plane had been the last to arrive, but they were finally reunited after half a year apart. It had always been Ou Yang who would leave home and come back to Ge Wen time and time again in the past, but this time, it was Ge Wen who had left and gone to Montreal to prepare things on the other side, while Ou Yang stayed for a last few profitable jobs.

They did not smile to each other. They had been married for eight years now, and it seemed that they knew each other well enough to understand without expressing their feelings verbally, even after all this time of separation. Isn’t it true that, with time, we become the victims of routine and habit?  We stop sensing the world as a moving object and people as changing beings, while we imperceptibly evolve everyday. If we stopped to think, we would be appalled by how completely the monotony of daily procedure consumes the passion of love and replaces it with numbness, turning a couple into drudges for life.

Ge Wen removed the heavy bag from her shoulder and took her place behind the luggage cart. Ou Yang then threw her arms around Ge Wen and wanted to kiss him on his cheek, but Ge Wen ducked away, saying:

“You must be tired!”

Ou Yang knew that he was shy to show affection in public and gave up, casting him a begrudging look.

Ge Wen was still fighting with the signs at the airport intersections as they made their way to the highway. Pierre E. Trudeau airport was not far from where they were heading, just 20 minutes from the airport. Home was also 20-minute drive from Downtown Montreal. It was very dark out at 1 am and there were no cars on the roads except for theirs. They had been driving for 15 minutes, but she still saw no tall buildings.

“Where are we going? Do you know where we live? You said it was very close to downtown, but it doesn’t seem like we are driving in the right direction!”

Ou Yang would, of course,  have been doubtful about a close-to-downtown place that showed no signs of the “big” city as Montreal was supposed to be in her mind. In China, even a district  on the outskirts of an urban centre would have been full of glamorous lights, people walking and eating along the streets, and the honking of cars and trucks to startle and remind us of where we are. But here, just a bit past midnight, there was nothing to remind her of anything close to what she knew of a major city. This feeling removed her from her familiar mindset, which was evidently some 18 hours behind, as if she were still in China, and it left her with a bizarre sensation of not really knowing where she was. Ge Wen was driving, and that was the only fact that fastened her mind to her familiar world.

Their home was a rented one-bedroom apartment in a triplex buildingIn Canada it is called a three and a half: bedroom, sitting-room, dining area with kitchen and half is the bathroom because of its small size. In the province of Quebec, especially in Quebec City and Montreal, there are many buildings that contain between two and eight apartments of different sizes, such as the one Ge Wen rented, or four and a half or five and a half. These properties, with each apartment bearing a different civic number, usually have only one owner who takes care of the mortgage payment, then the city and school taxes, insurance premiums, and maintenance and repairs. The owner collects the rent and in return takes care of the tenants. The rights of both sides are regulated by a government rental board that, in the owners’ eyes favors the tenants, while the tenants feel it is quite useless in keeping the rent from skyrocketing with inflation in recent years and the real estate market rapidly gaining value.

All of this was brand new to both of them. The architecture of the properties , the gardens and the arrondissement of the whole city threw them into an imaginative world. In China, there were no such properties except those rural areas of the big cities with “cages à poules” (chicken cages), with no kitchens nor bathrooms, clustered together to serve as temporary dwellings for the people who had migrated from countryside for short term jobs. But these chicken cages are not really temporary; they end up being the permanent homes of millions of Chinese workers who have been constructing the LOOK of the “new” China with their minimal needs and compressed desires. But for Ou Yang and Ge Wen, their cozy little apartment, situated in a nice two story building with gardens lit with solar lights at night, made her feel more like she was living in an expensive “villa” in China.

Montreal is a special and important city for Canada. It is not the capital of Quebec, but it is perfectly bi-lingual: English and French. It used to be the biggest city, but after the 1960’s, when the car industry replaced that of the train and tramway, it gradually lost its economic importance. Ironically, the Chinese were the ones who actually built the Canadian railroads in the second half of the nineteenth century, and the construction of the railways was as surprisingly corrupt as that of the high-speed trains now being built in China. Montreal’s old port used to be as busy as Huangpu Port in Shanghai, until the St-Lawrence Seaway was built to provide access to Toronto and The Great Lakes areas. Mr.Duplessis, the dictator-like Prime Minister of Quebec during the 1940s and 1950s, instead of welcoming changes and liberation, supported the traditional power of the Catholic Church and gave opportunities away to Ontario, which helped Toronto surpass Montreal to become the largest city in Canada. The French population of Quebec had been experiencing great humiliation in education, jobs, and social status. They were treated as inferior to the English population as a whole, and the elite wanted to change their destiny by launching the very important “Revolution Tranquille” (Quiet Revolution).

Most Chinese chose Vancouver, for its shorter distance to China, or Toronto because of the language issues encountered in Quebec. One of the results of the “Revolution Tranquille” was Bill 101, which mandated primary and secondary education in French to protect the French culture from assimilation into an otherwise English continent. For the Chinese, immigrating to another country where Chinese is not spoken was already a big deal, and so moving to a province where they had to learn another language as difficult as French appeared like another threshold. Nevertheless, the government of Quebec recognized the difficulties and thereafter created an integration French Program focused primarily on learning the language. Unfortunately, there were no efficient cultural courses set to help further the immigrants, despite its great effort in promoting French.

Language is an up-front issue of integration and a nation’s cultural upbringing is another threshold hidden behind colors of the skin, with the height of the threshold varying from person to person.  If the choice of leaving China and immigrating to Canada had determined the destiny of those Chinese immigrants as such that they have to put down their pride and pick up whatever it takes for them to integrate into a new society, then half the battle would have already been won. Yet how many of them are aware of the difficulties? How many of them realize the cultural and cross-cultural issues and how language, social customs, rituals and habit, and different values and references separate people into groups, circles, and races more than actual skin colors, look, or profession?
Knowing the history of a place, a province, or a country lowers the threshold and opens the gate to a new world, as well as opening the door to the hearts of the people with whom the immigrants are trying to blend in. A threshold in physical reality is nevertheless a minor and unimportant issue that we do not even talk about, but when the world is merging, it is then hard to avoid the importance of those metaphorical barriers that lie high in front of us. Canada is not the United States, and Quebec is not quite exactly like the other English speaking provinces. Ou Yang and Ge Wen, who came from China’s old city; we couldn’t  know how many thresholds they were conscious of and how many they were ready to cross over.