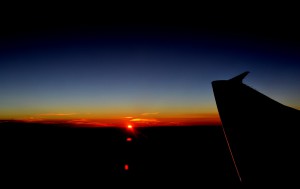 Ou Yang and Ge Wen arrived in Beijing, this time not for Ou Yang’s travel business, but for their own affaires: an interview for their visa at the Immigration Office of the Canadian Embassy: 19 Dongzhimenwai Dajie, Chao Yang District, 100600, Beijing.

Beijing and Xi’an, two very different cities, yet some parts of Beijing reminded Ou Yang of her own city and there was a certain “regard” in people’s eyes that Ou Yang was not unfamiliar with. She saw the “tossing-head taxis”* in Xi’an as well as here in Beijing, and her feet were swept by the huge bamboo brooms in the middle of the days by the city cleaners dressed in yellow vests or shirts. Yellow was the royal colour of the Chinese kingdoms and now it had trickled down to the people on the bottom and was used on the city cleaners’ uniforms. But above all, Ou Yang felt close and cozy as if she were at home in Xi’an when the old lady in the shabby and barren basement “hotel” handed her a clean set of sheets and pillows after she tipped her 10 yuan.

Ou Yang had always stayed in three- or four-star hotels with her travel groups, but this time they had to pay from their own pocket, so they chose the cheapest hotel they could find to save money, and this was the closest one to the Canadian Embassy. It only cost 45 Yuan a night for a room with two single beds, even though there was barely anything else besides the “boiling water”* TV set of “Rainbow”* serving only to give the look of a “hotel.” The Turkish toilette was just behind a sink where the guests could wash anything they wanted: dishes, chopsticks, under-wears, anything. The concrete floor was so worn out with time that it had become shiny. There was no decoration of any kind, not even a piece of curtain to hide the people inside from the sight of passers-by on the streets. But it was in the basement, after all. Who would break their backs to bend down that low to look under?

The next morning, Ou Yang and Ge Wen got up very early so that they could be the first in line at the embassy. The days in mid- autumn still did not break too late and it was already 7 o’clock.

“Ge Wen, get up!” Ou Yang did not see any movement, so she called again and dragged out his name: ” Geee Weeeeen, hurry up! We are late! ”

His hair looked like spikes in the air and Ou Yang had to push him into the public shower. What “public shower” meant for men in those days, we would have to ask someone to know! She herself used her old tricks and dropped a little perfume on her neck. After she had prepared all the necessary documents and placed them carefully into her business suitcase, she sat down again to put on her jade earrings while she waited for her husband. She took out her hand-mirror and looked seriously into herself. She was stern about everything and everything had to be perfect. He face was perfect, her skirt was by a famous brand, her lipstick was by a foreign brand, and her eye lashes were vividly and beautifully tilted towards the right direction. She was a young woman who knew what she wanted and it seemed that she had a certain ability to obtain it.

When her husband came into the room, Ou Yang started firing words at him like a machine gun:

“Why are you so slow? Hurry up, Hurry up! We will be at the end of the line if we don’t leave now! You are just so slow! Ge Weeen, Hurry up!”

A short time later they were at the back of the Embassy where people had already queued up in a long line. Ou Yang had been right, they were late! Ge Wen offered to go get some food near by while Ou Yang waited impatiently for their turn.

Ge Wen came to a food stand that sold the Beijing golden”wuo wuo tou”* with millet porridge, to be eaten on the street in the morning. Two or three square tables with benches were scattered around on the wide sidewalk. The serving lady was too busy to wipe off the tables with empty bowls and carelessly left chopsticks. Ge Wen got their food into a container, grabbed two pairs of chopsticks and left with a “thank you” to the food stand lady. The lady was obviously not from Beijing and in her mid 30s. She was too busy to hear anything anyone said to her or to any one else. Ge Wen was thinking of Ou Yang and the lady was maybe thinking of her own kid being lectured for bad marks at school in her home town and seeing her own mother looking after her kid instead of her. The importance of the lives of two strangers meeting on a Beijing street one morning was so irrelevant that neither of them really looked into each other’s eyes. Why would they look at each other, some might ask? Well, why wouldn’t they, when they actually talked to each other?

Ou Yang and Ge Wen ate while standing in line. The whole morning went by, and there were still people in front of them. When it was almost their turn, around 12pm, a Chinese girl came out and announced:

“Sorry, everyone, we are not taking any one any more today. Please come back tomorrow!”

Everyone started complaining about the inhumanity of the Embassy making them wait the whole morning, but they left regretting not having woken up earlier.

“This is all because of you!”  Ou Yang threw a hard look at her husband and went away fast without him. Ge Wen followed quickly and begged her to wait.

“I am sorry, baby. I am so sorry! I will get up earlier tomorrow morning, I promise!” Ou Yang looked at him from the corners of her eyes with her lips begrudgingly protruding, as if an oily bottle could be hung there. She murmured:

Ou Yang was a professional, successfully making much more money than anyone else in her family; only she had managed to become professional and important. In her eyes, no one else was trustworthy. If you want something done right, you have to do it yourself! You might doubt that such a person was wise and right all the time, and she would definitely think that you knew nothing at all!

They did not have to set an alarm clock. Ou Yang was a sharp one, and that morning she was up at 5:30, and at 6:30, they were out of the “hotel” again. This time they were fifth in line. Soon it would be their turn! Ou Yang finally allowed a faint smile on her concerned face.  To Ge Wen, seeing Ou Yang happy, even just a little, really made his day.

After the thousands of exams and tests Ou Yang and her husband had gone through in school and for job promotions, they now had to go through another kind of exam. The interviewing official was a man of about 40. He had very short hair, an abnormally narrow pale face with thin lips like a cut, a pair of light grey eyes that would make you feel hallucinated and having nothing to look into. He looked at their papers and started asking questions without lifting his eyes. Ou Yang had expected a warmer welcome, but the interview had started with full banality, to her great disappointment!

“Why are you choosing Quebec?” was the first question.

Thanks to the training with the emigration company, they had learned something about Quebec and they were prepared to answer questions like that.

Quebec was for people who were about to have kids because it gives more financial support to families, or those who wanted to use its government study subvention system as a bridge to jump to other cities such as Vancouver, Toronto, or even the US after graduation. But of course, they would not answer like that.

“We like Quebec, because French is spoken there. French Quebec people are very friendly.”

It sounded so mechanical and false that, without a doubt, the official would surely understand that the answer had been taught by the emigration company. It would be very strange for people from Xi’an to know about Quebec and its history, when for the past 15 years they had almost only been exposed to American or British history and culture.

Both Ou Yang and her husband answered all the questions as if they knew all the answers. There was no doubt that Ou Yang’s work as a tour guide for eight years had greatly helped her to leave an excellent impression and convince the official that they were absolutely well prepared for their life-changing emigration to Quebec, Canada. Her fluent English and the “impressive” French that she had learned 5 months before had indeed shocked the official in a very pleasant way! Ou Yang’s attentive attitude and her charming smile had certainly helped them pass the interview!

It was such a special and unprecedented test that they had made themselves more nervous than they had ever been. It was a “Yang” (foreign) exam, given by a canadian official! If they passed, they would not go to any universities or be promoted to better jobs or higher pays, but they would get to fly across the big pacific ocean, to move ten thousand kilometers away, to look at a sky far, far away from home as it hovered over their spirit, expanded and full of wonderful wishes for their own future and their kid, or maybe children. It was not anything like getting a train or plane ticket to any place they could imagine, nor a ticket quite like one to Paradise, but it was strangely illuminating as something like that might be. Getting that visa was absolutely a big deal!

* tossing-head taxi: those tricycles with manpower as convenient cheap transportation in cities of China. The slang comes from the movement of the tricycler when he peddles from side to side tossing his head from left to right.

*    boiling water: when the TV does not have a good connection, the screen is like boiling water with dots flushing.

*    wuo wuo tou:steamed bread with portions of wheat flour and corn flour mixed. It used to be the main food for Chinese northerners.