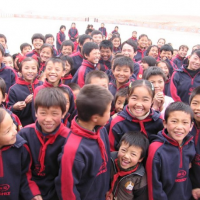 Autumn arrived with ripening crop, and the sun gliding away further north. Its rays were still bright but without much heat, like the light reflected from a mirror.

Many years had passed without much notice, and suddenly Ou Yang was 30 years old. For all these years,Ou Yang had been happily leading internal and external travel groups all over China, to the beautiful and exotic Yunnan, crowded Beijing, and big, modern Shanghai, home of delicious delicacies and humorous Xie Ju of Chuan Ju of Chengdu, while her husband Ge Wen worked loyally for a state owned enterprise as a civil engineer and waited with unquestionable fidelity for her to come home.

Ge Wen was born at the end of 1966, which explains his revolutionary name: the inverse of Wen Ge（文革 ), which means The Cultural Revolution started in the year he was born. In the year 2000, Ge Wen was already 34. For a married man, at this age, he should have long been a father by now, but Ou Yang had held the issue and dragged it on until both families were on the verge of making threats! Ou Yang, again, had arrived at a crucial threshold  where she felt that becoming a mother was much more serious an issue than the sweet love she had lost. Time seemed to pass by happily, with a busy schedule and lots of money coming into her big piggy bank. To her, a kid was a vague image of the translucent Casper, the cute and friendly ghost from the American children’s movie, while Casper lost a bit of his friendliness  in real life which concerned her and his cuteness stayed in the movie unfortunately!

Having kids is a normal family issue and the first child can sometimes be an accident. Ou Yang had already two incidents of pregnancy, and she had insisted on having them aborted. Thirty years of age for the traditional people of Xi’an would have been an old age to be a mom. Usually mothers would try to scare their daughters into thinking that they had become too old to be mothers. But Ou Yang did not think so and often told them that foreign women could have kids even after 40.   Naturally, Ou Yang became very careful because of these 2 incidents. She was still shivering over the weird and scary experience at the hospital after her last abortion. The woman doctor was one of her sisters’ friends, and she showed Ou Yang her aborted 12 week-old baby left in a sieve ready to be seeped through.

Naive Ou Yang had no clue that the head of a 12 week-old baby was as small as a sweet pea, too vague and difficult to be differentiated among the blur of tissue. It took quite some time for Ou Yang to accept that there was truly a tiny “human” head in there. The whole body was shorter than an index finger with two tiny fragile legs on which the doctor pointed out to Ou Yang its minuscule but visible feet with infinitesimal toes. She could not finish this odd visit any more and dashed out of the room puking her guts out on the way. The running water tap just worsened her feeling of disgust, reminding her that the little pile of stuff called her baby was going to be flushed down the drain like the food residue.

It was the first time she saw life in that particular form and in that unexpected way. It was shocking enough that she felt sicker than she ever had before. It made her wonder, and she was saddened. Life could be like that,  and life could be just that fragile and unimportant. The little thing was not born yet and it had long lost its voice and right before it was even identified as a human being. Yet Ou Yang, whose voice and right were more important, was too yang even to make it a question; she was too much of a Chinese to start raising it as an issue, and so were the doctors and nurses who dealt with this issue every day. It only could be at most a rough lump on the family tree that would get older and uglier with time, or sighs for the ancestors not having their expectations met.

After all, China officially holds no Christian values, which makes the culture with its rules and rituals amazingly different from that of the Christian world. Yet even in the original homeland of Christianity, its interpretation has been making transitions with time, with discoveries of formerly unknown matters and adjusting the purposes of the anciently distilled and purified moral doctrines and theories. China has a bit of everything in its culture and traditions, even Islam, but not too much of anything or everything. Good or bad, we have no right to judge. Unfortunately, we have to deal with issues in certain domain that are beyond our ability and property to judge! Heaven and earth lie there tens of thousands of years in front of us, speaking of no words, uttering absolutely no judgement.

Ou Yang had been rather content with her admirable work and her life with Ge Wen. There was money and sex whenever she wanted.  She was making 100,000 RMB a year in 2000, when the average social salary was around 30,000 RMB. Her salary plus tips was lubricant enough for everything to go on well, and for everyone in her family not to have resentment towards her: her husband at home, her mother and mother-in-law, her sisters and extended family. All that began to change when the two families put the question of motherhood on the table. They addressed it as a serious matter and she would not have been left alone without giving her consent.

She had been thinking about it of course, but it was hard for her to picture herself as a mother, a mother like her own.  In the back of her mind, she had this clear image of Isabelle, if ever she would want to be a mother. But after the repeatedly lamenting stories of her mother and grandmother, she just could not see how she could be different or happier. She had seen so much of the light shed by Isabelle that she could not tell if she was mesmerized or not. How could there be wonderful mothers like Isabelle, and how could there be this kind of love that was so relaxing and releasing?

Ou Yang knew an emigration company in Beijing since she had a very close business relationship with some travel agencies there. Yes, Ou Yang had been lured, and rather than by the sweet motherly image of Isabelle met at school or by the illusion of love with Marius Gallant that she experienced when she was twenty years old, she had been pushed into finding a solution for her future child. She could not stand going to pick up her niece and nephew at their primary schools and having her ear drums deafened by the intolerable high decibel, high frequency noise of 70 kids swooping out and down the stairs, along with the other six thousands pupils, onto the two basket ball courts at school after classes were finished!  She also found it extremely hard to accept the teacher’s comment on her nephew’s little book, underlined in red pen: “It is disrespectful not to have stood up to bow to the teacher at the beginning of the class. 5 points is removed from the moral behavioral judgement.”  She didn’t know what to say to the poor little ones who had kept studying for another two hours after dinner or had to take chess or piano lessons on Saturdays or Sundays; she felt that it was wrong to have the doctors give them antibiotics to avoid missing classes whenever they had a cold! Enough, she obviously had just had enough of all these, enough of her mother’s wretched stories, enough of the schools, and enough of the pressure on her to repeat what her sisters and millions of other Chinese people had been diligently and desperately endeavoring for their kids who would “surely” look after their old decaying bodies and weathered souls when the time comes.

Ou Yang’s decision of leaving her mother and sisters was not taken as seriously and sadly by her own family than the family of her accomplice Ge Wen, mainly because she was not like Ge Wen who was the only child of his parents. Ge Wen’s siblings had obviously not been killed by the One-Child policy installed after 1979, but rather by the unfortunate storm of famine during the Great Leap Forward that lasted from 1957-1961. Only Ge Wen had survived.  But it must be said that neither, no one in Ou Yang’s family was happy about their decision to emigrate to Quebec, Canada. First of all, Canada was a country that they had never heard much of before, and what kind of place was Quebec? To Ou Yang’s mother, that was a big “NO” from the very beginning. Yet, Ou Yang was her youngest, her “chou chou” (a french word meaning “the spoiled one”), and she reluctantly agreed under the influence of the whole family and with the sweet yet uncertain hope of having a future “yang” (foreign) grandchild in Canada. As for Ge Wen’s parents, though they had always been as pleasantly agreeable as their only son, their hearts were caught in between losing their only old age financial security, spiritual reliance, and the joy of a future grandson, and helping their son please his wife. For them, it was worse than having their hearts broken. It seemed that their souls were being scattered around in an ambiguous torment of wanting to keep their son close and wanting him to be happy!