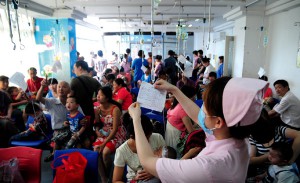 Eleven years ago, the famous twin towers crumbled down in black smokes! We could never forget the scene of a man falling along side of one of the towers and we could still never be able to imagine the horror and desperation that the three thousand trapped people went through. That was a war under the sun, the bright sun of September 11th, which caused the US wars to Iraq and Afghanistan for the past 11 years killing hundreds of thousands of innocent civilians as a collateral damage and indebted US with 4 trillions, another huge collateral damage that has surely put US deeper into today’s economic trap. Costly revenge!

This is a war, a war everyone understands and agrees to. But there are other fatal wars that are not easily seen and seldom or not enough noticed such as the abuses of antibiotics. Antibiotics are invented in the mid-2oth century as a gift and bless to us humans just as in the Trojan War for Helen, a wooden horse was pulled as a trophy into the city with armed greek soldiers hidden in its belly.  The abuses of antibiotics are breaking our immune system down by weakening or destroying our basic health foundation similarly as the horse was hiding Troy’s defeat in its belly.

I have been having a cold for 5 days now. Last thursday night, I started to feel hot at home. I thought it was because I closed the air-conditioner. I turned it on again. After 2 hours of cold air blowing and 21 degrees, the house was still hot and I was even sweating! My son came back home and reminded me that I might have caught the cold like his girlfriend! I found the thermometer and discovered that I did have a high fever: 38.8 degrees celsius. Then I went on Wikipedia and read about what to do with cold. It is not bacteria caused ailment, therefore, antibiotics will not help at all.

I video-chatted with my dad Friday morning and told him that that I had a cold. The first thing my dad asked me was that if I had taken antibiotics! I said no and explained why. But they still urged me to go get some in order to get better faster. In China, they do not know that almost all antibiotics are under the control of doctors. If we want to get some, we have to get the doctors’ prescriptions. The doctors here do not listen to us and they are very careful in prescribing antibiotics to ailment like mine. So hard luck, I said to them, I would die! My mother was curious and asked me what I would do to get better. I take Ibuprofen to kill the pain in my swollen glands that are fight the war for me as the first lines of defence. I need to sleep, you know, and I can not sleep because of the fightings going on in my throat! I love the green capsule of Ibuprofen that soothes immediately my burning throat, leaving me some tranquility and no collateral damage.

When Sunday passed, I stopped feeling my throat! Yeeeeeee! I seldom suffered cold with fever during the past 20 years, but this time, it is an enormous event in my life. I feel that time has stopped in front of me and stared at me as if I really was unbearably ugly. I look messy and old, but it is worth the patience to let the glands and other immune organs to fight for me instead of employing imported munitians too early than necessary. The basic foundation for our health is the immune system that needs to be protected and after all, to be trained as the army, so when the enemies come, it can fight back strongly and protect out health. I feel very happy to have  followed the health science in curing myself with no abuse of antibiotics.

When younger, we sometimes lived our lives like half asleep. Many things happened and it seemed everything was alright. We could never stop sweating and panicking only when we became conscious about the gravity of the matter! The abuse of antibiotics again have left us sweating and wondering what if…

My son now is 23 years old now. The two weeks after he was born, it was such an unimaginable nightmare that I just couldn’t write this article without talking about this experience. He was born with caesarean section.  I got low fever after we took our son home from 10 days’ stay in the hospital. The low fever was constant and would never go away. Obviously there was an infection somewhere. I went back to the hospital for a check up.

Upon arrival, the doctor hospitalized me and gave me antibiotic drip without any tests!  Oh my dear, the drip went on for 5 days without the temperature coming down! The worst thing as that my son was alone at home with his 25 years old young dad! I was in a true half asleep status that 5 days passed without thinking too much about how my son was doing at home! Being a new mom, frankly, I did not have much sense about how to be a mom!  The motherly love is usually gained and learned only after the child is born, but my son was not there for me to learn the sense of a mother. I was all alone in the hospital receiving this whatever antibiotics drip that went into my body like water. On the 5th day, the temperature was still 39, exactly the same as the day I went in. Then the doctor took some tests and gave me some small pills, still antibiotics, but another kind according to the tests. The temperature came down 3 hours after I took the first pill!  The next day, I was out to be with my son.

The look of my son gave me shiver when I got home.He was so small, skinny, all white with his lips very pinky red. He did not smile, staring at me without eyes moving much. I found out that  he had been spewing milk and having dierreah for 2 days, of which the inexperienced dad thought normal for new-born babies.  The evening of that day, I threatened his dad to bring our son to the hospital. It usually took about 2 hours for them to come back home, but two and half hours went by and I was still alone lying in bed at home.  We had no cellular phones at that time. I was so worried that I went quickly to the hospital myself.

When I arrived, I saw that the nurses were shaving my son’s head! What the hell they were doing? I saw through the glass window that my son’s hands and feet were covered in white bands. The nurses were trying their best to find his blood vessels for injection! Oh, my lord! Not antibiotics for such a little new born?!  A small plastic bag with yellowish liquid was hanging on a metal support. It was not quite to my surprise that he was undergoing something serious, though not serious enough to make me guess the blood transfusion! My son was diagnosed three degree loss of body fluid and unbalance of acid and base. The doctor told us that he could have died if he was sent a few hours later!

My lovely niece is in Milan right now studying in Politecnico di Milano. Her primary and high schooling were accompanied with these antibiotics drip whenever she was sick. I was not sure if her doctor mother had her go through a test before the use of antibiotics or thought for a second that if antibiotics was the right solution at all( I would love to believe that she did). Every time she was sick, she was brought to the hospital where her mother works and got this bottles of drip. Antibiotics drip had become a religion in China for all kinds of big and small health problems. For  the poor school kids, it has become a quick solution for them to return to their classrooms faster, because no one wants their kids to miss schools or lessons, otherwise, they would have legged behind others…

Even though we suffer the abuse, some like us are lucky to have survived this horrible bless. Among even the developed countries, abuses of antibiotics bring people serious side and adverse effects on the light side, and on the fatal side, organ function failures, incurable problems, even deaths. A big percentage of antibiotics prescriptions are not necessary,  and China ranks the highest of antibiotics drug abuse among the countries. “Only around 20 percent of patients require antibiotics, but recent statistics show as many as 70 percent of Chinese in-patients using the drugs. The maximum recommended by the World Health Organization is 30 percent”. Even though China started last month to crack down the abuse, the purpose will be hard to achieve without its people having a good knowledge about the functions, side and adverse effects. In An Hui province, the devastating tragedy of one worker killing his pneumonia woman doctor was caused indirectly and partly by the abuse of antibiotics. He found out that his early improper antibiotics treatment in Shenzhen had caused the resistance to normal antibiotics that he had to pay astronautic number of money for imported medicine from other countries without guarantee that he would be cured ( need the link for your story posted some weeks ago).

This is a war, an invisible war against ignorance, non professional attitude from doctors, against laziness and profit over people’s health and well being. We need to get to know the health science even as patients, in order sometimes to fight harder to avoid some greedy doctors to push the sales of new antibiotics. We need to be attentive to and patient for the health situation and suffer that we have to go through. Certain suffering is not all bad, comparing to long term irreversible damages to our health.  If we want to keep our immune system stronger, give it a change to practice, to train itself to be strong soldiers for you and me. All medicines are there to save our lives only when we are in danger, but it is eventually our immune system that truly sustains our body and survive our health, not the antibiotics. If the system is gone, antibiotics can then do nothing. When nowadays the busy life style seems indispensable, the one and the only indispensable is our life and its sustainer – Our immune system!