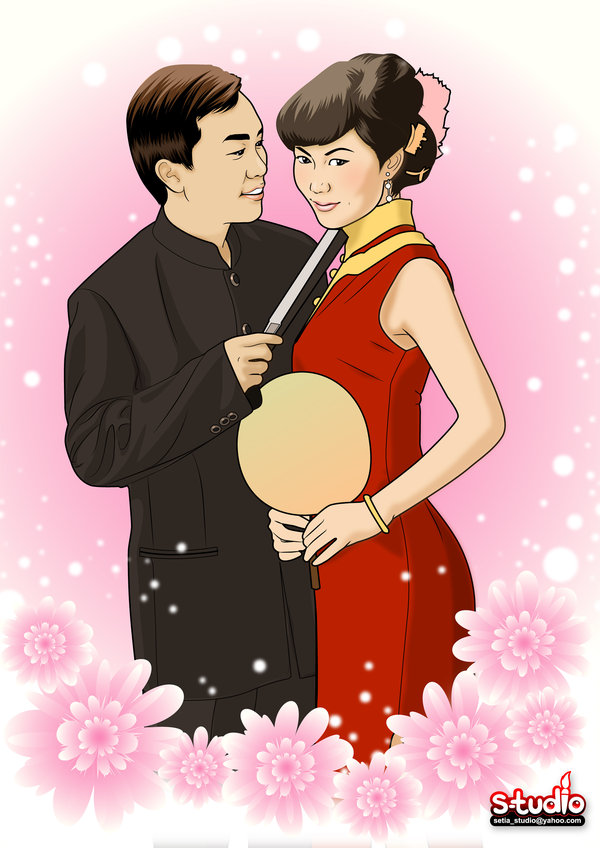 Part I -3 – Heart Broken, and Then A Wedding

Falling in love with a young Frenchman on a tourist trip was beyond her imagination, as well as how to go about it and if it was to end up in anything more. But Ou Yang was either too young to feel “supernatural,” or her “responsibilities,” or simply too soaked to be able to feel anything but biological calls. Both Ou Yang and Marius felt like they had hidden sponges under their skins and they sucked on to each other whenever they had a chance! Recalling their cuddles and kisses, even just looking at each other with their secret love and the kind of dark “dirty” controlled desire would send her out of her mind. She found it very hard to be close to him and unbearable not to be close to him.

Only two days had passed and they were already inseparable. The trip had brought them to Jiu Zhai Gou. In the evening, after Ou Yang was removed of her duties, she knew that Marius would be waiting for her. They would leave the group behind and go out somewhere nearby, into a Heaven on Earth dreamland with pools of crystal clear water. Marius’ eyes were filled with green reflections from the water and the trees standing around it. They could look into the depths of the pond and see the fallen branches extending  further away, and there was nothing stopping them from looking into each other’s eyes and trying to stay as long as possible, and of course, “les espaces entre les doigts ont étés créés pour laisser une autre personne les combler” (the spaces between the fingers are created for another person to fill in).  In that moment, both felt that there was no mountain higher than the one under their feet and no place better than this fairyland and no person had ever been better than the one in front of them; the whole world existed only for them.

You will always wake up from every dream, just like every day has a night to follow. It seems that the more glamorous the love, the shorter it lasts, just like the quick and energetic passing flare of fireworks, an exciting popping flash in the sky, quickly fading and giving the universe back to its permanent darkness. Ou Yang’s group returned to Xi An. The airport had become the most tedious place she had ever been, even though Marius had promised to write to her and would plan another visit soon. But that promise had stayed a promise, recorded in her book with a few letters. Ou Yang’s soul had gone dormant for about a year with unbearable and unbeatable patience.

Eventually her heart was broken, but not by the fact that Marius never showed up. Like Ophelia in Hamlet, the dream of love would have never died if she had not fallen into the water and drowned herself, still holding a bouquet of beautiful poisonous Rue in her hand. A virgin girl, pure and fresh as white orchid petals, would always take her first love too seriously to let it go.. As a girl born in the early 70’s, a somewhat educated young woman from the bosom city of China, of course Ou Yang expected to be married with the man who took her virginity. She became half lunatic and often daydreamed about Marius, who had been the one and only man in her heart. That she had refused all marriage proposals had made her family wonder what had gone wrong with her and think that she was not normal.

At the same time, Ou Yang’s mother continued to find potential suitors for her to choose from, without knowing the things going on in her daughter’s mind. Ou Yang could not imagine what would have happened if her mother and sisters had known the story.  Her sisters, being both more than 10 years older than Ou Yang, behaved just like her mom. Since her 20th birthday after graduation, Ou Yang’s Mom and sisters, together with the help of her extended family, had all been very keen on getting her into a marriage, otherwise the “good” ones would have all been taken, leaving her a spinster.

Another year passed , and Ou Yang turned 22. Oh, she felt old!! After a year of picking, she finally chose a decent looking man,,university graduate,  tall, lean, and somewhat square faced, with a nice pleasant smile. His eyes were small, though, and that seemed to be his only shortcoming amongst all his merits. He was not only smiley, but also very modest, and never uttered a word more than he should when he was with people. He was a few years older, which kept Ou Yang’s family further assured. Everyone in the family thought that he was the one, not just because they thought he and his family were rich or socially elevated, but also because he was pleasant and seemed to harmoniously agree on everything. Fortunately Ou Yang agreed, but with a creepy anxiety that was gnawing at her: she was not a virgin any more and she was ambiguously worried about what to do when that fact came to light!

In order to settle her mind of this irritating issue, she had sex with him before the wedding, with a stained handkerchief prepared. Things went well without a doubt! They dated for about a year and the wedding was proposed by the man’s family and was agreed upon and arranged accordingly on 1st of October, China’s National Day.

The wedding was held in the big hall of the Shangri-La Hotel, Xi An.  Chinese love red and gold colours that symbolize prosperity and wealth. The set-up was very Chinese, showing the rich abundant ambiance. Everything was red: tables covered in red cloth, chairs in red fabric, floor carpets, bouquets of flowers in red and gold , and even the waiters and waitresses were dressed in red-flower patterned dresses and suits. The expenses were covered mostly by Ou Yang’s family, as her two sisters had married quite comfortably well-off  men with important positions in the city government and, Ou Yang herself has been working for a few years as a tour guide with no mean tips. The man’s family, all been frugal  teachers and clerks, was therefore relieved of the burden, yet they did feel shame for not being able to afford such expenses for their once-a-life-time wedding.

At the entrance to the big hall, both families were lined up on either side of the gate to meet their guests. Ou Yang’s dress was a traditional Chinese Qi Pao with the side openings running to the ankles, hiding her beautiful pearl-colour high heel shoes. Her hair was curled and brought up, and her long neck was unusually exposed and a few locks of curly hair bounced up and down on both sides of her well-painted face. All of this made her a very desirable woman and of course made her soon-to-be husband very aroused. Happy and excited as he was, Ou Yang’s husband felt great in a white western-style suit that made him truly stand out amongst the reds and golds, giving him an unearthly quality of some sort. He was quite content to be able to marry Ou Yang, a nice, pretty, ambitious, loving and caring woman for his life. He would never want to go anywhere without her, would never want to go sleep without her. She was his sky, his air, his breath, his everything!