This article comes from: TYWKIWDBI (“Tai-Wiki-Widbee”), “Things You Wouldn’t Know If We Didn’t Blog Intermittently.” and originally from: a 2008 article in the Los Angeles Times

That is what I believe God should be. We can not neglect the power of having a belief, yet God might not be the one whom others tell us or use to tell us what to do. Nonetheless, it is of no scientific approach(psychological) and attitude(practical) to be cynical about belief because of the existence of non-godly behaviours. I believe in God exactly as Jefferson does. He is a great and intelligent man. 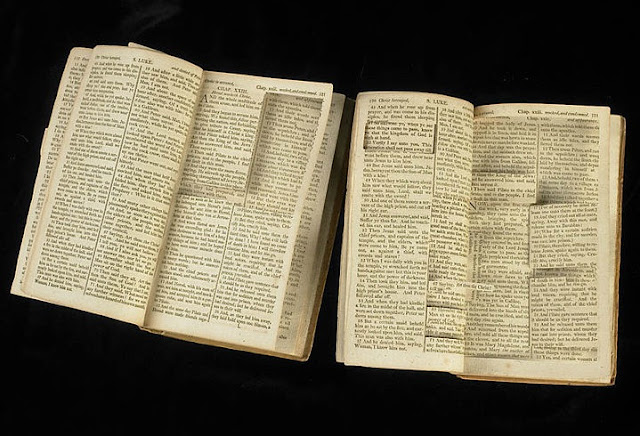 From a 2008 article in the Los Angeles Times:

Making good on a promise to a friend to summarize his views on Christianity, Thomas Jefferson set to work with scissors, snipping out every miracle and inconsistency he could find in the New Testament Gospels of Matthew, Mark, Luke and John. [top]

Then, relying on a cut-and-paste technique, he reassembled the excerpts into what he believed was a more coherent narrative and pasted them onto blank paper — alongside translations in French, Greek and Latin… [below] 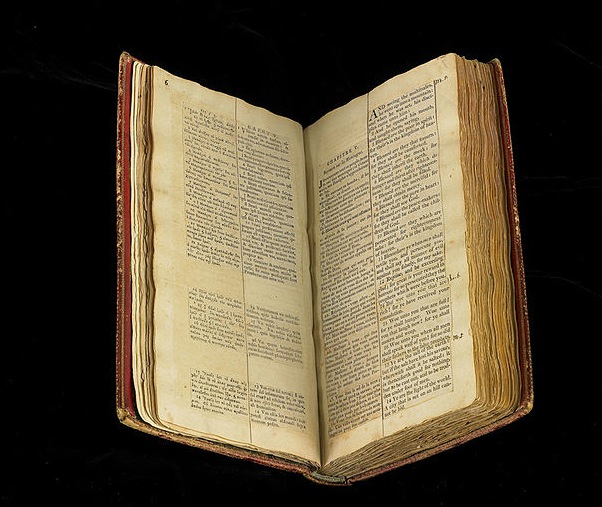 The big question now, said Lori Anne Ferrell, a professor of early modern history and literature at Claremont Graduate University, is this: “Can you imagine the reaction if word got out that a president of the United States cut out Bible passages with scissors, glued them onto paper and said, ‘I only believe these parts?’ ”

Like many other upper-class, educated citizens of the new republic, including George Washington, Jefferson was a deist. Deists differed from traditional Christians by rejecting miraculous occurrences and prophecies and embracing the notion of a well-ordered universe created by a God who withdrew into detached transcendence.

Critics of the time regarded deism as an ill-conceived attempt to reconcile religion with scientific discoveries. For rationalists in the Age of Enlightenment, deism was one of many efforts to liberate humankind from what the deists viewed as superstitious beliefs…

In a letter to [physician Benjamin] Rush on April 21, 1803, Jefferson said his editing experiment aimed to see whether the ethical teachings of Jesus could be separated from elements he believed were attached to Christianity over the centuries.

“To the corruption of Christianity I am indeed opposed,” he wrote to Rush, “but not to the genuine precepts of Jesus himself.”

“Say nothing of my religion,” Jefferson once said. “It is known to myself and my God alone. Its evidence before the world is to be sought in my life; if that has been honest and dutiful to society, the religion which has regulated it cannot be a bad one.”