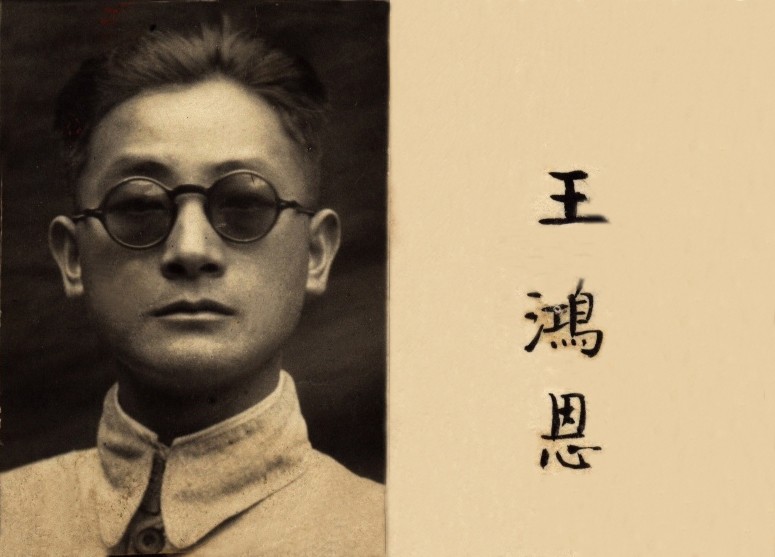 Uncertain Past on the Unsmiling Face (1)

This is the father of my father – a photo of him not photoshopped to look old or nostalgic, but rather the light brown color, like leftover green tea stains, emitting vague memories and a perplexing chagrin.

Strangely, in this reminiscent photo, he looks somewhat hoary to me, even without any pale white hair. A handsome, straight-backed man with long neck and relaxed shoulders sitting upright with dignity and nobility – a Chinese intellectual staring out of the epoch’s symbol of enlightenment: dark round tinted glasses. His thin confident lips stay tightly shut, leaving me to imagine what has neither been said nor described.

Next to the photo is his name – Wáng Hóng Ēn (王鸿恩), written on the backside by his own hand,  scanned and put beside by his 3rd son. I never knew he had a second name; the one I know is Wáng Xuě Tīng (王雪汀) – the name my parents used when they mentioned him on very rare occasion. That is also the name registered in the government hù jí bù (户籍簿 or 户口簿 – registration book).

The English translation of the Chinese “name” doesn’t make the same kind of sense, like how English or other languages may have a family name, first name, and middle name. In ancient China, there was the “míng” (名 – name), “zì” (字－like middle name, but not quite) and even “háo” (号－self-, community-, or society-given). I scrolled through Google, but found no explanations in English. So I turned to the Baidu search engine for Chinese.

Another source suggests that a man received his “zì” upon reaching adulthood (20 years old in China at the time) and a girl after being married away. It was, therefore, the name that family elders called their children to show amicability; that juniors used to address their seniors, superiors, and bosses; and for ordinary people to show respect and submission to their officials, kings, and queens.

On one hand, the “míng” would never have been used in public when addressing anyone senior or of higher status. It was the formal, registered name used only with great attention and prudence.

An extreme case in history would explain it the best. In the 1930’s, a Chinese cultural figure, Du Zhong Yuan, wrote an article called “Gossip About the Emperor” and mentioned the Japanese Emperor Yu Ren’s míng.  This literary act caused strong protest from the ambitious Japanese government against “the enormous disrespect” of their neighboring country and resulted in the writer being jailed for a year and half.

On the other hand, if a young person’s míng was called instead of “zi” or nick name, he/she would usually be in trouble. Therefore, young people who hear their parents calling them by their “míng”—especially by full family name and “míng”— should come home with their hands covering their asses.

Among the new born Chinese of PRC,  no one had a “zì.” Both before and after, the grassroots had absolutely no “zì.”  Until they reached school age and had a chance to go, they only had nicknames like “second dog” ( 二狗 – èr góu) or simply “second son,” and “second doll” (二娃 – èr wá) or “second daughter” (二妞 – èr niū). They had no right at all to call any one else’s míng, and they had no reason for a second name or “zì.”

During the Cultural Revolution, everyone became a “tóng zhì” (同志 – comrade). If they were fortunate, their names would stay in the dark, each person trembling silently with fear that their name would be called. They knew that if their “míng” was called, they would suddenly become enemies of the state with the burning “dà zì bào” ( 大字报 – wall posters) demanding their confession of anti-revolutionary actions.

In my own memory, my grandfather had no name, no “míng” nor “zì.” He was known to me only as Yé Yé (爷爷－nickname for granddad). It was very logical for me not to know his names, because of my junior status, all the taboos of using them and,  most probably because of his special family background and intellectual identity during the Cultural Revolution. I only got to know the name Xuě Tīng from my father, and by reading it randomly sometimes. I never knew his other name. I figured that Hóng Ēn must have been his nick name or his “zì,” and that Xuě Tīng must have been his “míng.”

As it turned out right, Hóng Ēn was my grandfather’s “zi.” I only found this out recently, around the same time that I saw this photograph posted on the QQ site by my third uncle. It was shocking and weird for me. This “new” name created distance between him and me and it obscured further my memory and the history of Xuě Tīng

It is only now that I’ve come to know a bit of my grandfather’s past and family history.

He was the twentieth generation of Wang’s San Huai Family Generations (Wáng Shì Sān Huái Shì Jiā – 王氏三槐世家) from Qiáo Tóu Town, Líng Líng County, Yǒng Zhōu Region, Hú Nán Province (桥头镇, 零陵县, 永州府, 湖南省). Up until now, this family has been recorded for 24 generations. I am in the twenty-second generation and already an indirect grandmother.

And it is only now that I’ve come to know his other name, and the meaning of both of his names. His míng Xuě Tīng describes my grandfather’s homeland covered in white snow (xuě – 雪) spreading on a waterfront (tīng -汀).  In his “zì” Hóng Ēn, ēn is a signature for his generation; all his brothers and male cousins were given this word at the end of their names. Hóng  (鸿) expresses his great ambition as a professional educator, his Èn (恩) implies the noble quality of gratitude towards his family and homeland in his character as an artist in life.

His son’s generation falls on “qǐ” (启－enlightenment) of the Wang family, whose ambition should have awed his descendants – including me –  though I am not a son but a daughter, who was not supposed to bear the generation signature “wàn” (ten thousand). But richer and higher educated families who were enlightened enough to send their daughters to school also gave “zì” to their girls.

Fewer and fewer families followed their generation’s signatures after the dawn of New China, and here we are:

The sons of Wáng Xuě Tīng and Zhu Zheng Ying:

The grand sons and daughters…