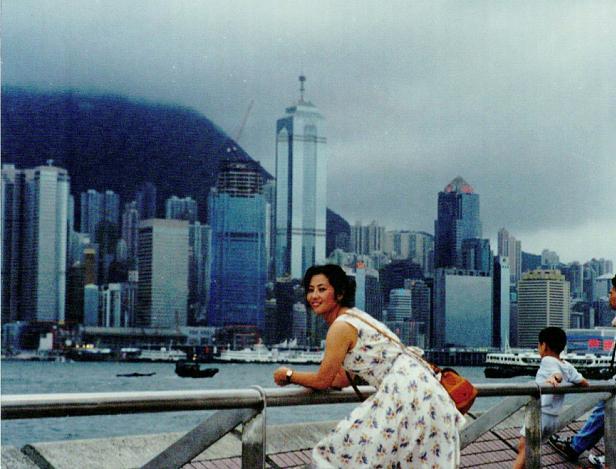 My nails are bleeding, my lip is too,

Keep in words I shouldn’t say to you,

Tie a letter to a balloon and let it fly,

Where it bursts let the words die

It’s not who you love, it’s how you care,

It’s not waiting for tomorrow, it’s finding beauty right there,

Take a trip down memory lane,

I know it feels different but it feels the same

Winter had not quite gone yet. There was still some dirty snow mixed with sand on the street corners. The cleared centerlines of the streets were laced with stains of the whitish-yellow industrial salt used for melting the ice.

Ge Wen lost his job at the end of March.

“Oh, well, I never really liked that job anyway!”  He said to console himself, but it was true; he had never liked the work beyond the fact that he needed the revenue.

Losing his job was a good opportunity to think about moving. Living in Vancouver had always been Ge Wen’s wish, and now he had a real chance to make it happen.

“I am looking for a job in Vancouver,” he told Ou Yang calmly one evening after their routine fight over Sonny’s piano lessons.

Sonny had wanted to play with his friend Yannick from a few doors down instead of practicing the piano, to which Ge Wen agreed but not Ou Yang. Ge Wen mentioned Vancouver more as a test to himself than as a threat to his wife. After countless times of being questioned and scolded, he had lost the courage to pick up any fight for anything. He also said that to end the argument, but it was indeed true that he wanted to leave Montreal. He wanted to find a different air, and live in a place where he could remember his homeland with less mountains and shorter distance to hallucinate over; he was even ready to leave without his son, and definitely without his buzz-killing wife draining all the little fun out of his pathetic life.

Ou Yang was obviously tired of arguing too. She was tired of all her responsibilities, at work and at home. She was terribly “fatiguée” of having to be at the forefront of everything, from the smallest things like grocery shopping, to bigger issues, such as planning family vacations. It was almost always only her who watched over Sonny and his piano practices and other activities. At least she felt so.

She had nothing but her little life in her head. Although she did go out dancing with some friends once in a blue moon, she could not just dance and have fun. She kept talking about her situation, her duties, her husband, her son, and even how unprofessional her boss could be, over the loud music, as if her friend could hear her. It was probably not important whether her friend could hear her or not, she just needed to talk it out. The loudness of the music gave her voice an excellent excuse to be even more unpleasantly coarse, and the light-heartedness of the salsa music made easy her improper and unkind judgments.

And yet, usually, she would feel guilty for her two hours of freedom and pleasure, and would put even more responsibilities and duties on her shoulders afterwards. She also unknowingly pushed her husband harder in washing away her own guilt. Worst of all, she leaned on her son and spoiled him in a very sweet but horrifyingly strange way.

It was horrifying to see that her high expectation for her son,  her inherited insecurity about everything, her impossible-to-fill void, her stale relationship and dried-up marriage with her husband; it was all about to land on the shoulders of her innocent son. She was completely and unconsciously dumping an unknown burden onto a 7 year-old child, under the glorious guise of “love”. Sonny was like a little piece of straw his mother would cling to when she felt like she was sinking into an endless ocean.

“If you want to go, you can just go! No one keeps you here.”

Ou Yang replied with no emotion, thinking that it might be a good thing for him to leave, at least for some time.

What about Sonny? Who would Sonny stay with? Well, when we are in fights, no matter how hot or cold, and we corner ourselves with no solution but frustration, we do not care about the impact or the details involved. It’s like being caught in a closed environment with smoke choking the air out of your lungs and blurring your already limited view.

For Ou Yang and Ge Wen, the only way left was to get out no matter what. Things had gone beyond fights or repair.

Ou Yang vaguely remembered herself following her mother to Hong Kong in 1985, when she had just turned 14. Her mother re-married to a man from Hong Kong after her father died of lung cancer in 1981. It was a good marriage, with the effort of many good-hearted people, But her mother had married this man too soon, according to her sisters, too soon because Ou Yang was not yet old enough to be on her own.  With the promise of her mother’s new husband, whom Ou Yang called Uncle Sam and who was 10 years older than her mother, the whole family agreed that Ou Yang should followe her mother.

But her mother’s good marriage quickly turned bad, because Ou Yang’s new stepfather did not agree with her mother’s way of treating her daughter. In his opinion, Ou Yang’s mother spoiled her by agreeing to everything she wanted. She remembered the day when she wrote with her fingers in the dust on Sam’s brand-new Benz. He told her that doing so would scratch the paint and that it would be very costly to repair the whole side. Ou Yang’s mother went mad, as if Sam had criticized her directly. She thought that the adoptive dad didn’t have the heart of a real father, and that criticizing her daughter was malicious to herself.

They stayed in Hong Kong with Sam for only three years. Ou Yang’s mother had no job. She felt that she was under a stranger’s roof and trapped within by his tall fences. She had given up her primary teacher’s job in Xi’An, with the hope thather rich Hong Kong husband could provide them with a good life, and a better future for her daughter, but she never felt at in Hong Kong, never felt the “unconditional love” for her daughter from Sam. It seemed to Ou Yang’s mother that she had traded herself for things that did not meet her expectations at all.

And so they came back to Xi’An. During her time away in Hong Kong, Ou Yang had learned a kind of superiority over her mainland classmates because she bathed in the sea, dressed in foreign styles, and spoke much better English. She spoke it even better than her clumsy mainland English teachers in high school who had never even been toGuang Zhou, a vanguard city for China during the years of historical transformation, with Hong Kong right at its back, a strong and direct influence for commerce and even fashion in Guang Zhou.

Now, it was Ge Wen who wanted to leave. Ou Yang would never let her son go, simply because she did not want her son to follow his father and later end up living with a strange woman who might treat her son even worse than Sam had treated her.

While she was feeling helpless, entwined by her past and present, Ou Yang saw her husband sinking further into the abyss of despair. Nonetheless, she was wise enough not to mention the shrinkage of their pockets too often. Ten months of unemployment insurance had paid him a bit less than sixty percent of his salary, and with the impact of taxes and insurance, Provincial and Federal Child Support, the actual situation was not that much different from before.

Everyone has inertia, and since most Chinese city men have the incredible ability to put up with humiliation of all kinds from their frustrated and seemingly impossible to please wives, a passive change of situation like Ge Wen’s unemployment became a faint lead for a “solution.” This change, unfortunate as it may have seemed, brought a kind of excitement to both. They knew that, somehow, a solution was on its way, and no matter what it turned out to be, it may not make them feel happy, but it would at least let both of them breathe.

Elizabeth was not coming to Montreal, so she and Ou Yang traded e-mails and talked on the phone. What Ou Yang eventually discovered about Elizabeth, horrified her:

It was a typical example of how happy news can turn sour, so sour that you have a snap moment of not knowing what you are thinking or feeling, the acidity causing a few seconds of brain freeze, like when you eat ice-cream too fast!  That was big news, a completely absurd, unexpected piece, the possibility of which had never been previewed in Ou Yang’s mind. It could not be true, not possible, unimaginable!

She lay in bed for countless sleepless nights figuring out for herself how it had happened and how it could happen to a goddess-like woman such as Elizabeth herself. To her, divorce seemed like a disease in the world, a plague among the atheists or anti-gods, dismay for merit-seeking conventions, and a grand disappointment for the stubborn wishes of high-school sweethearts seeking the Happily Ever After.

Ou Yang could not and would not accept that it had happened to her best friend. She just could not see how her idol had gone down the same path as the easy atheists. Elizabeth’s merits had been Ou Yang’s inspiration for life, her land was Ou Yang’s dream land and her family was the lovely reality that Ou Yang would wake up to from her own. And yet now, in Ou Yang’s mind, the divorce resembled Elizabeth’s departure from all her merits, and was turning Ou Yang’s reality into a horrible nightmare and her dreams into ashes!