The Sky of Mei Mei

The First Story of Paradise Circus *

Preamble: When we migrate to unknown lands, we are blinded by the beauty of fairy tales and mirages! We are naive to dream that there we will surely have the things we miss on earth: security, freedom and happiness. We are bold enough to go through the space between earth and heaven, to enter into a place we always believed to be without demons, pain, nor tears, only to find out that Paradise is a noisy CIRCUS … Despite this grand disappointment and disillusion, HOPE, whoever retains it, lifts him, or her, from falling…

“Have courage for the great sorrows of life and patience for the small ones; and when you have laboriously accomplished your daily task, go to sleep in peace. God is awake.” ― Victor Hugo

Mei Mei, a petite 13 year-old girl, followed her mother and the crowd into P.E. Trudeau airport in Montréal, Canada.

They arrived as tired and roughed as the seventh huge and clumsy suitcases bound with layers of transparent plastic. With Mei Mei watching over the numerous extra small bags, tiny mom dragged each big piece off the luggage conveying belt when they arrived. Two hours of fussing about and waiting after 27 hours not sleeping much on the upright narrow seats and endless idling around at stop-overs in airports, Mei Mei and mom could barely stand. Mei Mei was so exhausted that she could drop dead asleep on the spot, regardless.

Dad was waiting. Three of them exchanged silent greetings without any body contact and hurried into Daddy’s rusted grey car. To where? Mei Mei had no idea.

Their flight was the last, and so were they, driving lonely on the high way 720. It was 1:30 in the morning…

The deep plain February winter of Montreal, with its vast expanse of snow took Mei Mei’s breath away. She came from Kunming, the capital city of Yunnan Province in the southwest of China,  a blessed place which earns its beautiful name as Spring City. She had never seen real snow in her life, the only recalls of winter was the Camellia Japonica which extend their glamorous exotic and sexy petals with various rich, noble colours from January to March.

Goose feathers fell silently from the dark infinite sky onto the front window and piled up on both sides of the wind shields.

Mom was numb and quiet , dad’s mind drifted away intermittently with the flying snow, only the wipers accompanied them loyally with dry squeaks, the rhythm of which kept their hearts beating, and led the car running into an unknown black hole of mute void.

The large thick snow flakes only seen on photos or in movies awed Mei Mei and goose bumps crept into her skin! She was so excited that her drowsiness magically disappeared. One moment, she was in a dream or a movie, or her memory of the familiar soft and warm winter in Kunming with the Camellias swirling around like the skirts of Spanish Flamenco dancers, another, she came back to this strange yet exciting, distant yet truly present reality at the sight of her motionless mom and dad sitting side by side in the front.

Daddy had already been in Montréal since October 2003, for about 4 months, in order to take care of the basic needs when Mei Mei and her mom would arrive. He rented a two-bedroom apartment for $400, and paid  $65 per month for utilities. At the current exchange rate, $465 was equal to about 3,100 RMB, which was about the total salary for the couple, his wife making RMB 1,500 as a chief of a technical department of a state-owned company and himself RMB 2,500 as chief of a university research institute in China. With years of accumulated savings, they would be fine for the first four or five years in Montreal, even without having any revenue.

Their car stopped on a narrow lane in-between two rolls of plexes in a city called Verdun. 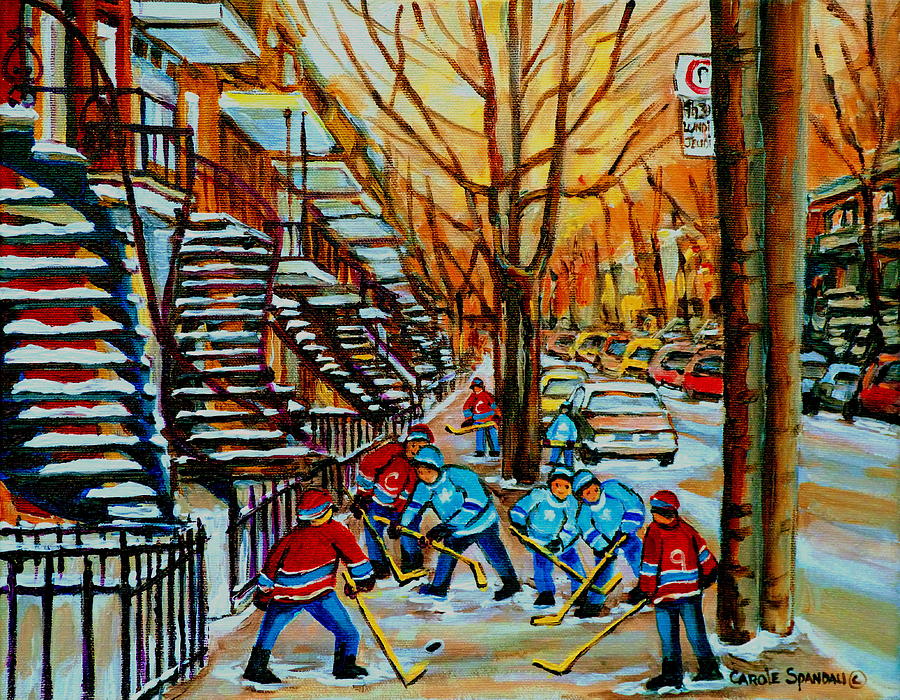 Arriving at their home in Verdun, slightly South West of Montréal Island, the scene disappointed Mei Mei as she saw the weird style of apartment called double salon, where the master bedroom is open to the sitting room.

Their home in China was not as extraordinarily huge as those of some of her classmates,  but at least there she had her own room, and it was as large as the bedroom and sitting-room here put together! To the Chinese in China, whose country is new and most buildings were constructed after 1995, the crappy 6-plex at Verdun built around beginning of 20th century, made them feel as though they had come to a very “backward” place.

As a young Chinese girl, Mei Mei had no knowledge of the age of the 6-plex which is linked with many other plexes. She did not know that they were town houses in the immediate suburb, close to bus stops and subway stations designed and built for immigrants, workers and lower income Canadians. In China, the meaning of town houses has changed its connotation to trendy stylish houses for the upper class of Chinese society — the New Rich. She also never had any idea of its basement, where she saw the old cast-iron sewage pipes broken and “repaired” with Scotch Tape. Seeing all the shabby, dirty, and nearly falling apart furniture that her dad had picked up on the streets, Mei Mei burst into tears and dashed into the bathroom where she saw a broken toilet paper holder hanging on the wall from only one side.

It was not what the couple wanted for their only child who had always been spoiled by her grandparents and relatives. It was even less desirable for themselves, as they had reached their golden middle age, each having earned their comfortable and relatively well-paid permanent positions in China. They had set their feet onto one of the best countries in the world, dragging their pieces of heavy baggage to this “never-heard-of” before of Quebec, in the Northeast of the American continent!

For the mother, it was simply a nightmare. For the father, it seemed like the start of a scary dream in an extremely long night from which he did not know if he could ever wake up. He vaguely felt that he was falling into somewhere in-between without earth nor sky but dreams of colours and temptations.  He started feeling regretful for having come here after 4 months, leaving Kunming and China behind, a place, though without dreams, yet at least full of warm sunshine even in winter, and no risk of getting frustrated over new challenges and adaptation, and losing in a strange country full of temptations and freedom that he didn’t know how to handle. Mei Mei’s life started anyway, regardless of all the weirdly alienating feelings. She had to learn French, since Quebec is a French-speaking province of Canada and the 101 law passed on Aug. 26th, 1977 obliged almost all immigrants to go to French schools. She was among the earliest immigrant groups from Mainland China, who started landing in 2000. By 2003, Chinese from the mainland were still scarce and most Chinese people in the small Chinatown spoke Cantonese. To her surprise, the Chinese Han language is called Mandarin here and the meaning of China is connected with the fragile chinaware, the reasons for which she had absolutely no idea.

Mei Mei started her French Welcome Class. There were about 20 students, most of whom are East Europeans, actually Romanians.

The professor was very amicable and patient, especially to Mei Mie. Whenever Mei Mie had questions, she would come to her desk and asked nicely:

Most of the time, Mei Mei was too shy to ask questions, and she didn’t know how to. Seeing her classmates already speak quite well after a few months, she felt dumb and stupid that she was still fighting with herself about some pronunciation and grammars…Mei Mei had always been an excellent student in her class in China and this never happened to her. It was really hard for her to take easy the giggles of her classmates over her funny French.  She would feel very embarrassed and frustrated, resulting in feeling inferior to the rest of the class. She didn’t know that Romanian is one of the latin languages as French is, and the mandarin of Chinese is by no means close to any.

One long year went by. Mei Mei finished her Introductory French Welcome Class, with a still-awkward pronunciation and intonation of the French, taught by her professeure qui vient de la France, with a thick Chinese accent. Now in the normal school system, she had to adapt to the French of the Quebecois. She had to learn the “là, là” before starting a sentence, and to finish it with “ben oui, tarbanouche”. Understanding this meant mastering the local language, with which she gained some recognition, respect, and comfortingly, a little confidence!

She began to make friends, even though they were only Chinese. Yet don’t pears grow from the same tree? They spoke the same language, talked about the Chinese cartoons “Ne Zha -哪吒”, “Hu Lu Wa – 葫芦娃”, and were used to the nice piece of finishing music at the end of CCTV big time news at 19:30, heard during each every single night when they lived in China. They told each other how rich their parents were, and how big and nice their flats had been. They all complained to each other about how bad it was in Canada, and how stupid were the Quebecois! They sought some consolation by venting subconsciously, and restoring a tiny bit of their comfort and confidence by connecting to the mentality that had been their unconscious support before they left their own country. Among the “weird” language and “cold-hearted” people, the CCTV ending music became so soothingly pleasant to their souls that they enjoyed it immensely for the first time ever in their young lives. Mei Mei was like a little pear tree that was uprooted and replanted in a far away place. When replanting a tree, you need to prepare the pit with fertilizer, and give enough water to make sure its roots quickly take hold of the earth and start absorbing nutrients for survival in the new environment. When Mei Mei’s parents took her to Canada, they did not ask her for her opinion. As Chinese parents always think that their children have no idea about life, it is out of the question to ask for their opinion. Mei Mei came to Canada with no valid preparation, no parental guidance, and no friends at the beginning of the most dangerous adolescent age. The worst of all, she had been misled into thinking that Canada was an easy country with excellent social welfare, free schools, and nice people to blend in with, forgetting, or rather, not being conscious at all that moving to another country with a different mentality and culture would increase the danger for an adolescent girl. Yes, Quebec is a kind province where the provincial government provides free Cours de Francisation and subsidized English or vocational courses for new immigrants. But life is not only about one-sided will, neither is it only about food and roof, nor merely about schools to go to; it is more about how we can find our home for our soul.

For immigrants, it requires an extra effort of understanding and adapting into the existing system and its earlier arrivals’ mentality, creating a hybrid culture that enriches this new country. It is especially true when Chinese culture and mentality remain among the most complicated and sophisticated, tangled with feudalism, socialism and the recent 25 years of capitalist influence. Immigration is about rediscovering our soul by blending into other cultures, and winning the battle by establishing a brand-new “mash-up” spirit for ourselves and for the new country, in this new land! The author uses “Paradise Circus” as the name for a collection of her short stories in which “The Sky of Mei Mei” is the first.